On Saturday, we took a private shuttle from Xela to Antigua. There was 5 of us total from the school. Our first stop in Antigua was to Refugio Coffee shop which had the best almond milk latte of my life. We chatted for awhile, and waited for 2 girls to check into their hotel. One of the girl's had a friend in Antigua who has lived in Guatemala 3 years who also came to chat with us.

We checked into our own hotel, Casa de Antigua, and were amazed by the center garden which had a huge fountain and was surrounded by purple, yellow and pink flowers. We spent $50 each for two nights. The showers offered hot water and the beds were clean.

Next, we went to Choco Museo. We were offered shots of chocolate alcohols and samples of tiny morsels. I started feeling warm and buzzed, and we headed out to explore the city. We ran into so many beautiful buildings. We went to an old monastery which was equal parts beautiful and creepy. My home stay family said a lot of punishment happened when it was open, and girls at the age of 16 were forced into the monastery and could never leave again. The bodies are buried under the remaining buildings. Despite that, there was a beautiful wedding being set up and we snuck some peeks into the ceremony as we walked by the church.

We also got the opportunity to go into the library in the center of town which showcased a lot of beautiful ancient art.

We ended the day at Frida's, a restaurant covered in colorful art of the artist's well known face. Our final destination was Antigua brewing. We retired early because we needed to wake up at 5 am to climb Acaltenago.

Acaltenago simply put, was a beast. It was the second hardest climb in my life and our guide Alfonso said it is the hardest volcano in Guatemala to climb. The last 400 m was a belly pressed against the rocks like a lizard type of climb. The summit did not disappoint. Fuego, an active volcano that last exploded last June and killed 200 people, was almost touchable from the top of Acaltenago. It was humbling to watch it have small explosions every 10 minutes.

We ate at a India/Guatemalan fusion restaurant and then headed to bed. We took our shuttle back on Monday and arrived in time for a lecture on diabetes. There have been so many activities I'm having a hard time finding a time to write and not just describe what I did, but I plan to get back to it once this month's students have left and I have more time to think. 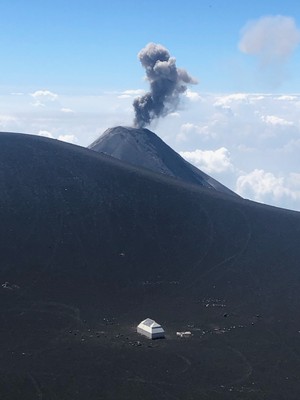 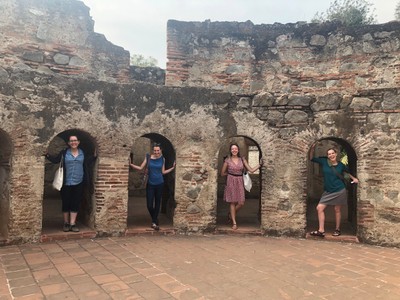 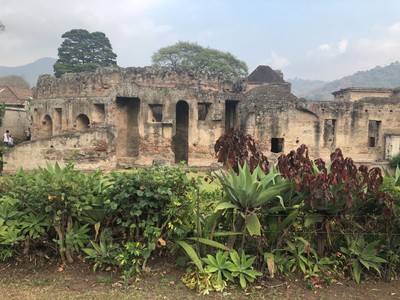 Previous Next Table of contents

This blog requires you to be a logged in member of Travellerspoint to place comments.

If you aren't a member of Travellerspoint yet, you can join for free.